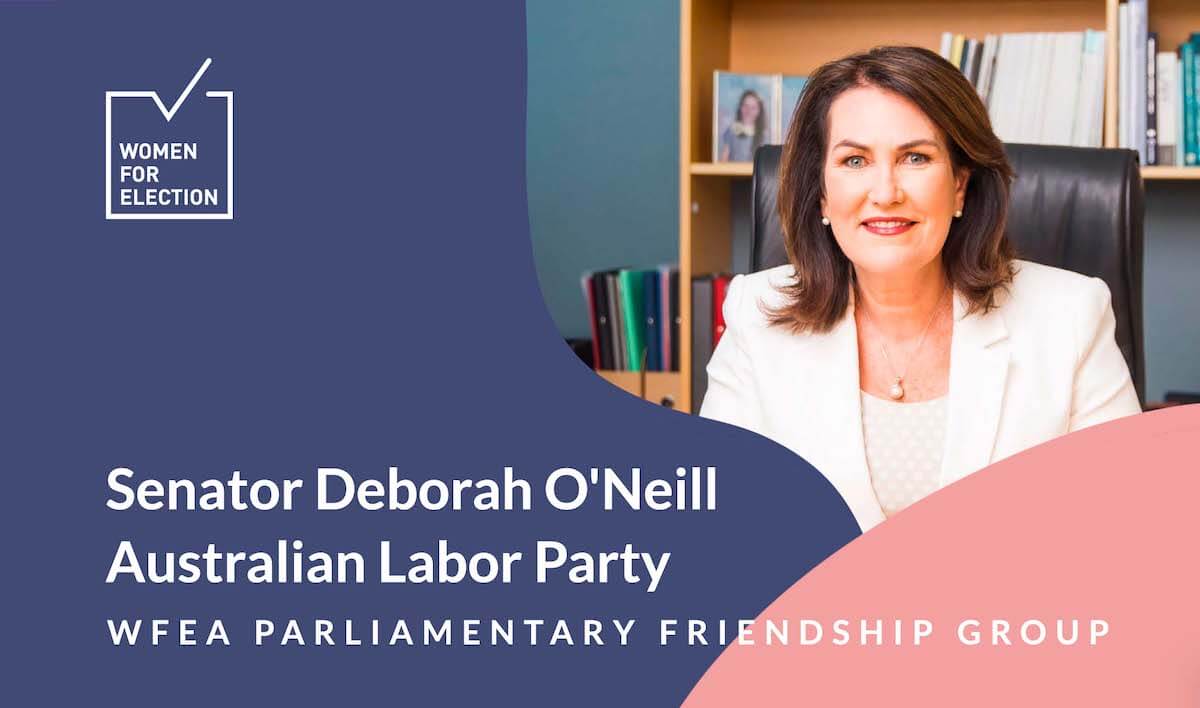 Senator Deborah O’Neill, Senator for New South Wales, for the Australian Labor Party and Co-Chair of our Parliamentary Friendship Group, answered a few key questions about being a woman in Australian politics.

I want to be part of demystifying the separation of life from politics and the gap between active citizenship and political participation.  If you have ideas for a better Australia, join a political party – the Labor Party is my pick.  I found my political home there because Labor values align with my faith- informed values and my life experience.  I believe everyone is my neighbour and that personal or family wealth should not be the most significant determinant of longevity, health, education access and success, or opportunity to reach your full potential.  I think lots of Australian women really think that way.  Mothers want that world of opportunity for their kids and grandkids in a way that is different from others who might seek to join the political fray. Political action in parliaments across the nation can help bring about the change required to align reality with those values and beliefs.

Too many moments and memories that I want to leave behind pop into my mind.  There are all the historical events I have tried to leave behind, as much as possible so as not to be burdened by them, as I seek to grow and advance in my life towards my own full potential.  Then there are the current and ongoing moments of misogyny – structural barriers, language practices, assumptions embedded in perceptions, comments on my appearance, my clothing, my incapacity to ‘understand’  being ‘ ‘mansplained’ to me, being talked over and being overlooked because I’m not ‘aggressive’ enough. All that sort of nonsense still flows through the corridors of power and in the supermarket aisle.  People are more regular and authentic in voicing that it is is less acceptable for those sorts of behaviours to continue – but change is slow and hard won.

When change does occur it is often not delivered by the loudest voices or the most strident critics – although they do have a place.   Rather change is won quietly by every person who respectfully and determinedly names such discriminatory practices and respectfully and determinedly refuses to comply with the abuse of power embedded in far too many lounge rooms, work lunch rooms, boardrooms and public places.  When we see another person making such a stand we are called to stand with them.

The structural barriers need to be identified and removed at every opportunity. That will cost – space from men to advance women, changes to wage rates and a concerted movement toward salary justice, i.e. same pay for same work, reevaluation and reshaping the rates of pay for the ‘caring’ feminised professions,  access to housing, education, elimination of domestic and community violence, affordable high-quality childcare and policies that make work/life/care balance possible. These policy matters need redress in order to liberate all those wonderful women from the overt traps and more insidious constraints that currently bind them.

When women fare better in the broader society in every way, they will have enough heart, mind and life space necessary to think about life in parliament. In the meantime, more of us need to bring that change to bear for those who need of dedication to the task. It will not be a win for women and the country if only wealthy, white, highly educated women can actually get into the parliaments of the nation. Secure safe seats (rather than marginal ones) and therefor stay in parliament long enough to develop the necessary skill sets and relationships that underpin authentic leadership.

More diversity I say.  Wonderful wise women – we need you. And we need you in parliaments for a long time.