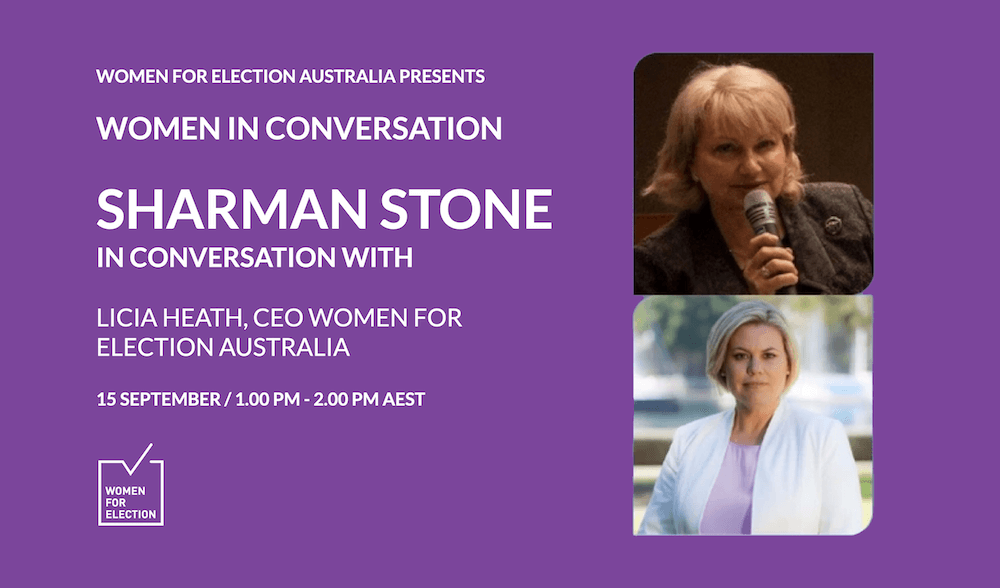 Sharman is well known for her strong win in the 1996 Federal election, having won the seat of Murray for the Liberal party after it had only ever resided in the hands of the Nationals party. Sharman widened her margin in the time she held the seat until she retired from politics at the 2016 election. Sharman looks back on her time in politics fondly but notes that she “experienced the challenges and consequences of a less than inclusive parliament. Women are not only underrepresented numerically, we fail to be found in equal numbers in the most powerful positions, shaping policy and allocating resources.”

Achieving greater gender equality and empowerment in the workplace and society has always been one of Sharman’s strongest commitments and she recently joined WFEA as an Ambassador.

Sharman has numerous books in print, including “Aborigines in White Australia”, which documents the evolving inter race relations from war to welfare and its formalisation into legislation. She became the government’s representative on the Australian Council for Reconciliation and Shadow Minister for Indigenous Affairs. She has also been a Shadow Minister for Women.  Sharman has represented Australia on gender equity issues in numerous multi-lateral fora, including: in the Human Rights Commission in Geneva, over four years at the UN NY; at APEC Women’s Economic Forum (WEF) in Chile, Vietnam and PNG, and he was an official observer of elections in Bangladesh and Azerbaijan.

Register now for this free event to hear more about Sharman’s journey into politics and why she’s so passionate about seeing more gender and cultural diversity in Australia’s parliaments.

In Conversation with the Sharman Stone

Please register for this event. Registrations close 3 hours before the In Conversation event.

You will receive your zoom link on the morning of the event. Please Note: Registrations close 3 hours before the event commences. 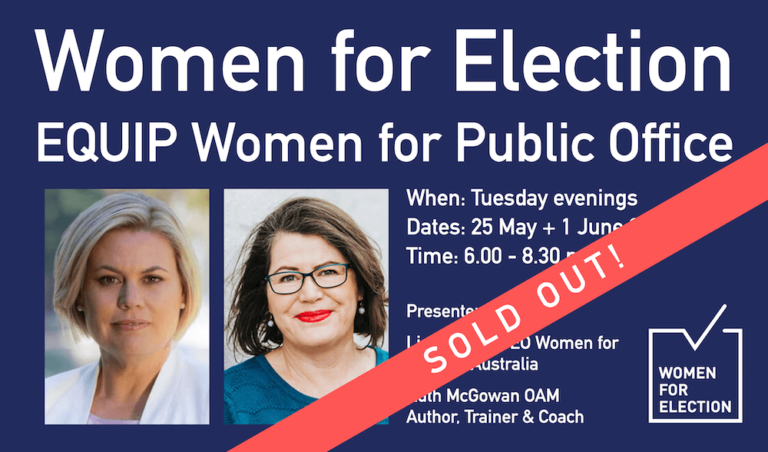 Join this national online program to INSPIRE + EQUIP more women to run for public office in Australia Women support their communities in so many ways. From running school P&C’s and local sports competitions, to establishing businesses and community campaigns and co-ordinating drought and bushfire relief for neighbours. These leadership skills are highly transferable to… 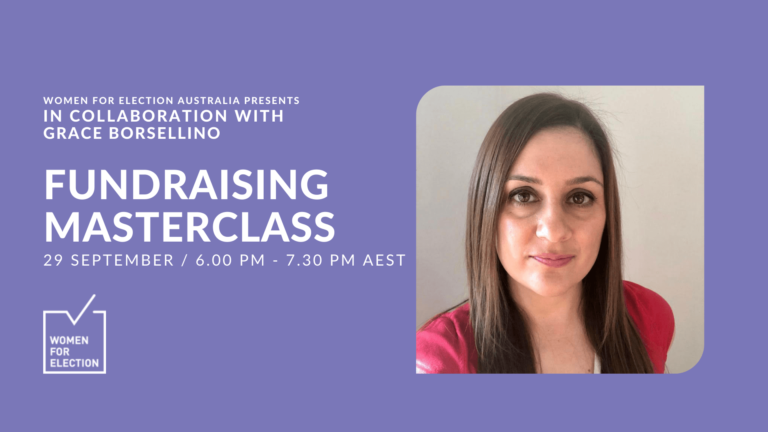 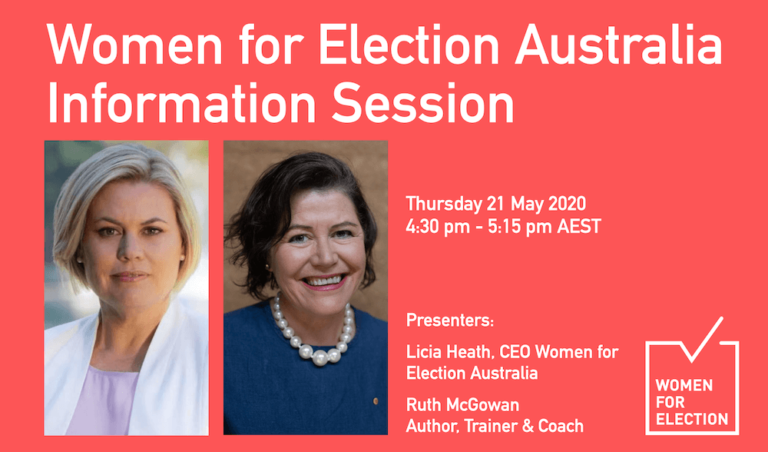 We are holding an online information session to share more about our mission, training programs and future events. The online event will be hosted by Licia Heath with guest presenter Ruth McGowan. Licia is the CEO of Women for Election Australia (WFEA) and ran as an Independent in the high profile 2018 Wentworth byelection. Ruth… 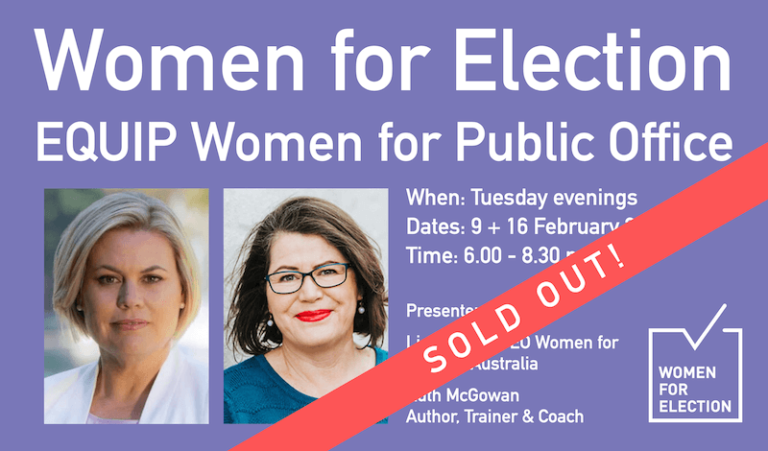 Join this online program to INSPIRE + EQUIP more women to run for public office in Australia Women support their communities in so many ways. From running school P&C’s and local sports competitions, to establishing businesses and community campaigns and co-ordinating drought and bushfire relief for neighbours. These leadership skills are highly transferable to elected… 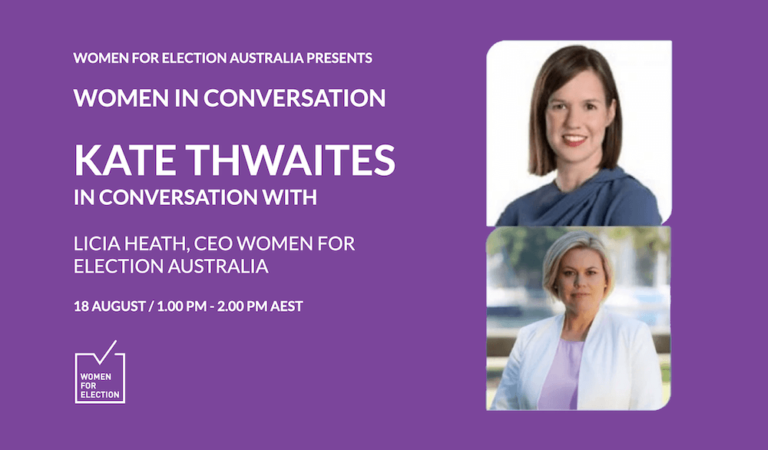 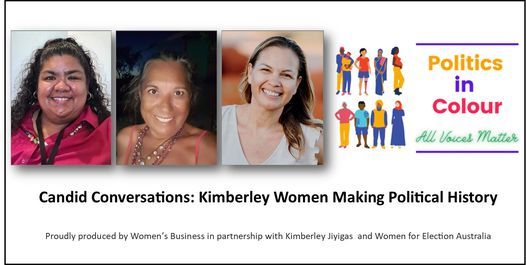 For the first time in Australia’s 200 years of colonised history, three Aboriginal women from the Kimberley region have been pre-selected to run in the WA State Election in March 2021.  Milli Hills will stand as the Nationals candidate, Divinna D’Anna for Labor and Naomi Pigram for the Greens. Women for Election Australia is delighted to…